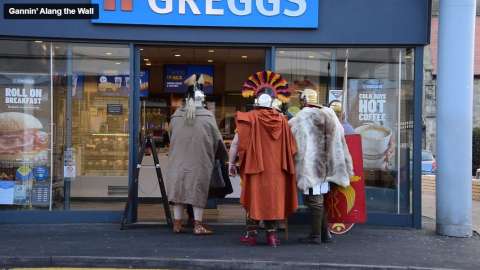 St James’ Heritage & Environment Group presents ‘Gannin’ Alang the Wall’ – a community film that celebrates the real route of Hadrian’s Wall, which passes through the centre of Newcastle. With the Roman Julia Lucia (played by Gail-Nina Anderson) as your guide and narrator, the film follows the route of Hadrian’s Wall through Newcastle, beginning at Segedunum fort and passing through areas such as Byker, Benwell and Denton Burn, before ending in Heddon-on-the-Wall, exploring the hidden Roman history of the city. With contributions from actors, archaeologists and local residents, the film ranges from informative to humorous and thought-provoking as it offers fresh perspectives on Roman history, exploring themes that include subjugation, conquest, division, and borders.

This event is part of Northumbria University's Festival Hub.