Secrets of the London Yiddish Stage 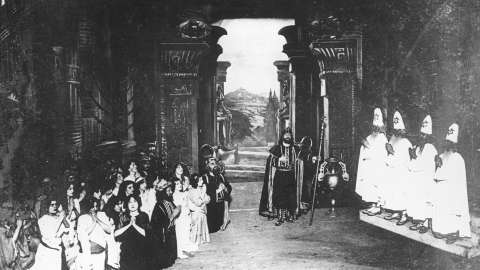 Come along to a rehearsed reading with musical interludes of gems translated into English from London’s East-End Yiddish theatre at the turn of the 20th century. You’ll get a sense of the history and atmosphere of London’s vibrant Jewish immigrant theatre in English and Yiddish, and can cry, laugh and heckle along with the action! Newly discovered secrets include one-act plays, sketches and songs, translated and directed by Vivi Lachs. See London’s East End through a new lens, from love affairs in Victoria Park to haggling about voting in the 1912 British election. From escaping the Russian draft of the 1850s to cheeky parodies of the British music hall. Expect Yiddish versions of Shakespeare soliloquies by actor David Schneider, and all-join-in songs from the band Katsha’nes.

Both entertaining and thought-provoking, this performance shares the secrets of a vibrant East End immigrant culture. The evening will be enhanced with visual material, drawing from the archive of Yiddish theatre posters at the Jewish Museum’s archive. No Yiddish knowledge necessary.

This evening is part of an AHRC project 'Making and Remaking the Jewish East End'. The research for this project was supported by the AHRC grant number AH/V001345/1.