Secular Celebration: Then and Now

Event type
Workshop, Performance
Organisers
Queen Mary University of London
Partners
Conway Hall
Contact
info@conwayhall.org.uk
Is event online?
No
Accessibility information
The ground floor of Conway Hall has step-free access and an accessible toilet. This event will take place in the historic Library on the first floor, which is only accessible by stairs. For those unable to access this space, activities will be facilitated in the ground-floor Brockway Room. Both rooms have seating and have hearing loops. Texts will be available in large print format. This event will be guided by Relaxed Venue principles. Those who do not wish to, or cannot, participate in group activities can engage with displays independently and/or have one-to-one conversations with facilitators. Please contact the organiser regarding specific access requirements.
Accessibility links
Conway Hall Access Information
Region
London
Address
Conway Hall
25 Red Lion Square
London
WC1R 4RL 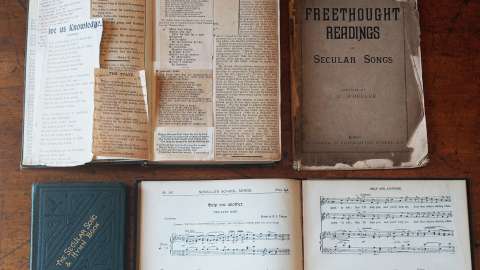 Since the 19th century, groups associated with Conway Hall have held secular ceremonies to mark births, deaths, and marriages.

Join researcher Clare Stainthorp and the Library and Archives team at Conway Hall to discover how people have celebrated life events outside of religious traditions, in Victorian times and today. Drawing upon 19th-century anthologies of secular songs and poems, read some of the poems used to bring secular communities together and discuss their role within the Victorian radical freethought movement.

Visitors are invited to bring along any texts that they have included in a ceremony or celebration - or would like to! Together the group will think about the themes and ideas the texts share and the emotions they evoke. This is an opportunity to visit the beautiful Conway Hall Library, where there will be a pop-up display featuring rarely-seen volumes from the archives that explore secular celebration and its intertwined history with Conway Hall Ethical Society.