A Michael Morpurgo double bill for this year’s festival

Michael Morpurgo is one of Britain’s best-loved storytellers and has published over 150 books for children. Two of our Being Human events this year celebrate Michael’s writing. Rachel Smith from Newcastle University tells us why this year’s festival theme of hope and fear particularly speaks to Michael’s work. 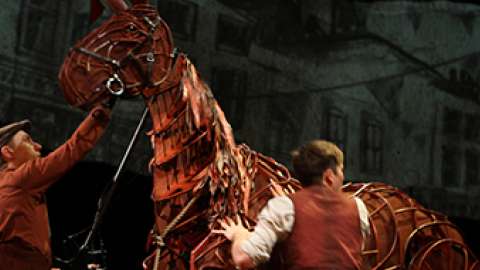 One of the first events and highlights of this year’s Being Human festival is an exclusive evening with bestselling children’s author Michael Morpurgo at Swansea University.

A week later and 340 miles away, Newcastle University is organising an event at Seven Stories: The National Centre for Children’s Books which will explore Michael’s archive: Hope and Fear in Children’s Books.

A strange coincidence, having two Michael Morpurgo events at a single Being Human Festival, but I think it’s because Michael’s writing really engages with this year’s festival theme. From the terrors of the First World War in Private Peaceful and War Horse, to stories of friendship like Kensuke’s Kingdom and the beauty of the countryside in Where My Wellies Take Me, Michael’s books span both fear and hope.

Original material from all of these titles feature in an exclusive Seven Stories exhibition, Michael Morpurgo: A Lifetime in Stories, which is at the centre of Newcastle University’s Children’s Literature Unit’s Being Human event on 24 November 2016.

Michael Morpurgo donated his entire archive to Seven Stories in 2015. A Knowledge Transfer Partnership between Seven Stories and the School of English at Newcastle has supported the exhibition and helped to unearth gems within Michael’s collection of draft manuscripts, correspondence and numerous orange school notebooks.

Dr. Jessica Medhurst, our KTP Research Associate, will be giving gallery tours where participants will find out about how the Michael Morpurgo exhibition developed. Dr. Lucy Pearson and the Seven Stories Collections team will show you original materials from Michael’s archive (including a version of War Horse where Joey ends up as horse meat…!). Then we’ll be testing your knowledge of hope and fear in Michael’s books in our quiz in the Seven Stories attic.

An evening with Michael in Swansea

And if you’re anywhere near Swansea, don’t miss seeing the man himself at Swansea University’s stunning new Great Hall on 17 November! I can tell you from first-hand experience that Michael is a really engaging and interesting speaker. This event forms part of Swansea University’s Centenary Lecture Series and will be chaired by Owen Sheers, Professor in Creativity. Michael will read from and discuss his new book Such Stuff: A Story-maker’s Inspiration, and the public will have a chance to ask him questions about his books and tales.

Perhaps I shouldn’t have been surprised to see another Michael Morpurgo event at this year’s Festival. Great children’s stories are full of hope and fear, and Michael is one of our greatest storytellers.