Being human under lockdown

Being Human festival director Professor Sarah Churchwell reflects on the role of the arts and humanities during the coronavirus pandemic, and on the importance of human connection. 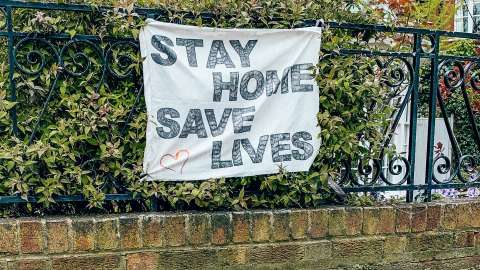 I’m not in the business of prophecy, but I am in the business of words, and I would like to mark my prediction that “social distancing” will be 2020’s term of the year, just as “bailout” was the term for 2008, and 2017’s was “fake news”. It is a term that (as a colleague of mine pointed out) puts the situation it is meant to describe precisely backwards. The measures it denotes are about maintaining physical distance, without losing social closeness and emotional proximity. Whatever we call these new practices of staying social while remaining physically apart, there cannot be a soul living through lockdown today who is not actively appreciating how much easier technology has made widespread quarantine and isolation for the vast majority of people. The situation has sadly intensified certain vulnerabilities, to be sure; but most people have been able to continue working and socialising while quarantined at home to a degree that was unimaginable until very recently indeed. This is so obvious a point as to be almost not worth making, except for one thing. We live in a society that has, by no coincidence, exalted science, medicine and technology over all other forms of knowledge for the last generation, just as advances in those areas made possible the digital revolution that is helping so many of us cope better with the conditions created by pandemic. But what people are doing with the technology, how they are occupying themselves during isolation, has been largely overlooked, because it is so familiar as to have become invisible. They are using technology not to be more like machines, but to stay human—by turning to the arts and humanities for comfort, imaginative connection, escapism, and respite. We know we are social creatures. The arts and humanities are expressions of that social instinct, of human connectedness, and interconnectedness. When we can’t make direct contact with each other, we exchange stories, art, film, television, books, jokes, recipes, and, yes, cat videos, as proxies, the means for indirect contact and to share comfort. We use them to connect through mutual emotions: laughter, joy, hope, fear. We use them to reflect on ethical behaviour, on compassion and kindness and the suffering of others. Recently a practice began to spread - we might almost say "virally" - among care workers: many photos posted on social media have begun showing hospital staff around the world, dehumanised behind protective masks and clothing, who pinned photos of their faces on their chests so that patients could see the humans who were caring for them. Some on twitter traced the idea back to the Ebola outbreak and credited artist Mary Beth Heffernan with the original idea. An artist helping doctors think through what it means to be human, creating lessons passed on through history: this is why we study arts and humanities. Machines keep us alive, but we need faces to feel comforted.

All over social media, people are sharing lists: of favourite films and television shows, of best books about isolation, and saddest pop songs. Patrick Stewart is reading a sonnet a day to his followers on Twitter, while Arnold Schwarzenegger’s pet videos raise money for vulnerable families. People are exchanging poems that offer reflection and consolation, history that enlightens us about epidemics of the past, literature that depicts human suffering and moral quandaries, or offers imaginative uplift and redemption. They are exploring digital archives, and wandering through virtual museums; they are watching dancers and sharing theatre online; they are nurturing, growing and making things: cooking, gardening, crafts, home decoration. They are playing games and educating their children and returning to musical instruments they put down years ago, watching films they’ve always meant to see, reading books they’ve always meant to read, practicing foreign languages, sharing favourite moments in sports history or joy in the connections between human animals and the nonhuman variety. All of these practices, skills, and knowledges are studied, and curated, by the arts and humanities.

"The pandemic has stripped away all our usual contexts, and in so doing it has made much more visible, and much more urgent, what it is that we do when we need to be human."

People are watching apocalyptic science fiction films about pandemic, as we have long sought to learn through cautionary tales and extrapolated visions of the consequences of human error or malfeasance. They are warning about the political and economic consequences of mistakes we risk repeating, learning from the hard-earned wisdom of the past. They are circulating human contexts for making sense of the immediate and unprecedented transformations and dangers that our society suddenly finds itself confronting. Even the metaphors can be instructive: for the last few years many readers have turned to Hannah Arendt’s Origins of Totalitarianism to better understand the political changes confronting Western democracy – but now may find new resonance in her description of totalitarianism as a fungus, spreading its toxins infectiously like a virus. As this pandemic is so brutally reminding us, nothing in our society occurs in a vacuum. Everything occurs in a historical, political, economic, and cultural context, and the humanities is in the business of understanding context. The pandemic has stripped away all our usual contexts, and in so doing it has made much more visible, and much more urgent, what it is that we do when we need to be human.

What it means to be human

On Friday 3 April I participated in a funeral for someone whose death was not related to COVID-19, but everything else about his passing was. He had died at home, as he wished, and in the weeks before his death his wife had self-isolated with him to avoid exposing the care workers who attended him to the risks of infection. Because his death was slow, and sadly expected, we were luckier than many who have lost loved ones in the spring of 2020: we were able to say our goodbyes in person, and a great many people who loved him visited him in the weeks before lockdown, all too aware that he would not long survive. When he died during lockdown, the regulations around physical distancing meant that only ten people were permitted to attend his funeral, and they were required to maintain spaces between them during the ceremony, which was live-streamed. My husband and I, like many of the other mourners, were unable to attend. Instead, we stopped work, changed into the clothes we would normally wear to a funeral as a mark of respect, went to our living room, sat on our sofa, lit a candle, and turned on the television to say goodbye to a family member. That is not a sentence I could have imagined writing even five years ago; until very recently no one could have written it unless they happened to be related to a celebrity, and even then they probably would not have watched the funeral from their sofa. More than 140 people joined from all over the world to say goodbye to one of the most joyously social people we all knew, including mourners in France, Germany, and across the Atlantic. I am certain that during the course of the ceremony, most of the other mourners will have reflected, as I did, on how extraordinarily lucky we were to have technology as a prosthetic, enabling us to take part in this ritual that is so central to what it means to be human: telling stories, displaying photos, sharing grief, celebrating love, marking the painful brevity and fragility of human life. All of this while we protected each other and the rest of society from contagion, even as we found continuities and reinforced social connections by means of technology, but through the meanings of being human.